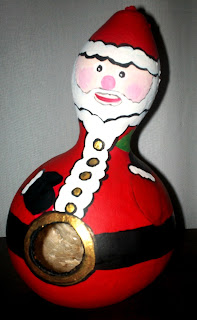 So here is a project several years in the making! The bird house gourd was planted by my mother-in-law in the backyard of my old house when she came over to help take care of my wife(she had the flu or something?) while I was at work. The plant took over the back of my garage and started going into my neighbor's yard.  We were not really fans of this plant to say the least!!  Out of this horrible plant came only two good gourds.  I decided that my mother-in-law needed to have them both!  The first one came out super cute...covered in sunflowers with a cat's open mouth for the hole(made to look like her kitty).  For some reason...the Santa was trippin' me up.  She collects Santa's..so that is why I wanted to do one for her...but the neck/head/hat area was challenging to make work.  So after becoming frustrated with Mr. Claus...I put him away for a couple years.  For some reason..I decided to pull him back out this year & have another go at it(another Christmas Break project!!)  This time I felt the results were acceptable. I know she'll like it...and probably be a bit surprised that all these years later that plant is still providing her with gifts!! ha ha  Hopefully that won't encourage her to plant one of those darn things at our new place!!!!!! HA! 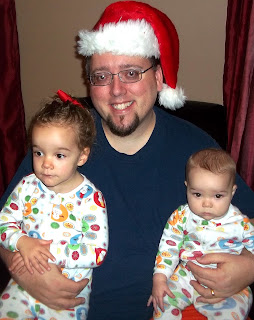 From the Edinger Family to Yours!!!!