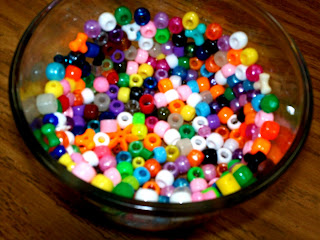 I saw a very cool melted bead bowl on Pinterest & wanted to try it myself.  The blog it came from was in a different language...and even with Google Translator...I felt I was missing some information.

I first rubbed the inside of my dish with veggie oil & heated my toaster oven to 200 degrees(this is info I got from the google translator).  I grabbed a couple handfuls of beads from my craft supplies and spread them out in the bowl. I "baked" the beads for 10 minutes, but could tell hey had not really melted.  I was concerned that the beads were too thick/hard, and may not be the type of beads used on the post I had seen. 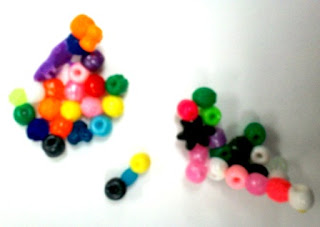 After pulling the bowl out after 20 minutes in the toaster oven, I realized I probably was right.  The beads were not the kind used in the images I had seen on Pinterest.  Oh well...I was experimenting...so failure is fine. You learn from your mistakes and try again! 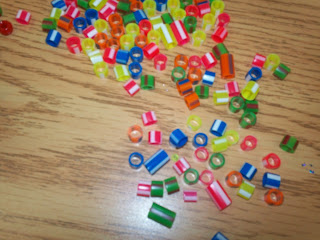 This time I went through my beads and found ones that looked like what I had seen.  These were thinner & seemed to be softer.  I had ones that had painted stripes & ones that were solid.  I placed the striped ones in the bottom and a majority of the solid ones on the sides (no reason..just how I did it?!?).  Back into the toaster oven at 300 (I upped the temp a bit).  I quickly realized the beads on the side were melting, but the beads on the bottom seemed to not be?!?!  I left them in for about 15 minutes, and here are the results. 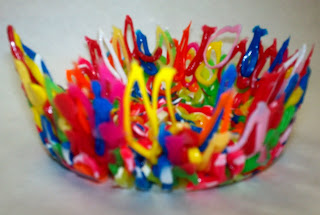 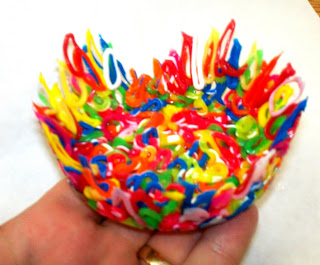 The bowl worked this time!  However, I do not see this being a lesson I could really use with my classes during a regular school year.  It may be a project I file away for an art camp.