Sunday Devotional With Mr.E: The Van Gosh We Don't Know

Vincent Van Gogh is one of my favorite artists.  Seeing his work in person is almost a religious experience.  The color, composition, and texture of his work can hold my gaze for untold amounts of time!  Most people know of Van Gogh, and might actually be able to pick his work out of a line up.  It has been a favorite for umbrellas, calendars, puzzles, mugs, and other printable items.  However, this is what most know about Van Gogh: Beautiful Art, Cut Off His Ear, and Killed Himself.  Based off of this knowledge, most people have great pity for the life he lived...and shake their head at the foolish loss.

What about the Van Gogh we don't know? Vincent Van Gogh was a teacher, a pastor, and a missionary before embracing his call as an artist. Though he never lasted long in any of his previous "professions"...it reveals his heart for people & for God.  Yes, it is true he did have a deep internal struggle that led to his suicide. It is true he made some "bad" choices in his life.  However, he lived so much life in his 37 yrs on this earth that people do not consider. (Like he produced over 2000 works of art...many of those in the last decade.)  For him to be remembered as a sad/depressed man who cut his ear off....shows a lack of understanding & compassion.  We judge an aspect of his life without considering the man as a whole.  We look at the sad expression of his self portraits, and forget the smile of the sunflower!
What am I getting at?
WE ARE JUDGMENTAL HYPOCRITES!! 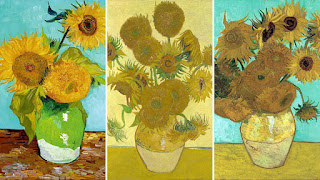 (This section of scripture begins with the Pharisees trying to "trap" Jesus....bringing a woman that was caught in the act of adultery.)
When they kept on questioning him, he straightened up and said to them, "Let any one of you who is without sin be the first to throw a stone at her.  Again he stooped down and wrote on the ground.  At this, those who heard began to go away one at a time, the older ones first until only Jesus was left, with the woman still standing there.  Jesus straightened up and asked her, "Woman, where are they?  Has no one condemned you?"  "No one, sir" she said.  "Then neither do I condemn you, " Jesus declared.  "Go now and leave your life of sin."
John 8:7-11
We only allow people to see so much of our life.  We keep the things less desirable hidden/covered up.  We then point our fingers at those who do not choose to hide their "issues" and shake our head & wag our finger. (How often have I rolled my eyes at or dehumanize the Kardashians as idiots...instead of feeling a compassion for them?) You know what though, God knows us inside and out.  There are no hidden places with The Lord.  And yet...He deeply desires a relationship with us.  So much so that He came to Earth, showed us the way we should live, died on the cross for our sins, and rose again to give us new life in Him.  He doesn't throw the first stone...He is the first to reach out in LOVE!  There is no sliding scale for sin...sin is sin!!!  Yours is just as wrong as those you judge.  Yet He wants you to be His.  If the Lord can look through the eyes of love at us...why can we not extend the same to those around us.  We need to be less quick to judge & justify our own behavior based on the world....and quicker to extend the same love & grace given to us.
Maybe I'm speaking to myself?  However, I think most of us do have areas we need to "adjust" to the Lord's heart.  What is your area(s) where you lack grace/compassion?
Ask the Lord to reveal it...and heal it!