Sunday Devotional With Mr.E: Not what I expected...

Artists often have a picture in their mind of what they want to create before they even pick up a paint brush (or whatever media they use). Many will sketch out or create mock-ups of what they wish to make before beginning the final piece.  I've seen so many be able to reproduce their ideas perfectly.  I, however, seem to be unable to actualize my initial vision.  It always morphs & changes.  This isn't necessarily a bad thing.... my final work is just not what I expected.  Maybe my initial vision/sketches aren't strong enough?  Maybe my ideas change because I realize I don't have the skill to carry out my first thought?  Maybe I realize I don't have the right colors, brushes, or supplies after I begin working? Or is it possible...that ideas are meant to change and grow as we live with them and apply them?   Sometimes things not being exactly how you expected is a good thing. 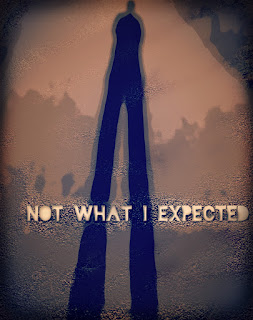 As Jesus walked by the sea of Galilee, he saw two brothers, Simon called Peter and his brother Andrew.  They were casting their net into the lake, for they were fishermen. "Come, follow me," Jesus said, "and I will send you out to fish for people."  At once they left their nets and followed him.  Going on from there, he saw two other brothers, James son of Zebedee and his brother John.  They were in a boat with their father Zebedee, preparing their nets.  Jesus called them, and immediately they left the boat and their father and followed him.  Matthew 4:18-22

I can't imagine that Peter, Andrew, James, and John went to fish that day expecting to switch careers. Fishing was in their blood. It's what they knew how to do. It was very much apart of who they were. However, meeting Jesus change people. It changes minds, attitudes, interests, perspectives, relationships, and sometimes careers. No...they probably did not expect such a change to happen. They probably had a vision for what the rest of their days would look like.  Thank goodness they had open hearts to what God wanted for their lives.   If we are too possessive of these things...we can miss out on God's best for our life.  Even when things seem to be "for" God...we have to make sure that we approach it open handedly.  We have to be able to accept things that are "not what we expected" ...because in the unknown we can see the most growth happen.  It is where belief, trust, faith, and action meet.

Do you need things to be as expected?
Can you use a bit of faith stretching change?

I'd love to hear how God has/is shaking things up..and the results of it!