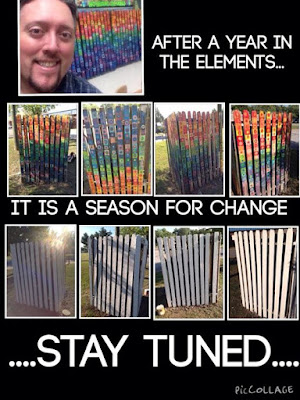 Last year I received a Facebook message about old security fences at a condo that were being thrown away...."If anyone could make something out of them...it's you!"  Without clear direction...I said yes.  Quickly the Kandinsky Fence project came together.  It was a true collaboration between students, parents, faculty, and other community members.  It turned out beautiful.  I learned A LOT! (like what primer & paint to use...well...more like what NOT to use).  When it got blown down after tornado/straight-line winds...instead of being the end...it was new life(the person that put it back together again for me REALLY secured it).  I noticed at the end of last year...it was starting to look a little rough.  As much as I hated seeing the Kandinsky Fence go...it was a chance for something new! 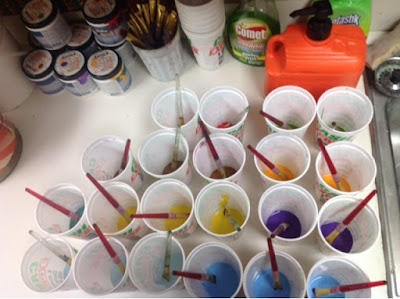 I went to a local paint place...and they sold me a gallon of high quality exterior "oops" paint for  $4!!  It was an off white...which was a perfect "primer".  I then went to home depot and purchased their sample size paints.  You can get a nice amount of high quality paint for an affordable price!  Total..I spent less than $40 to give new life to the Fence Project. 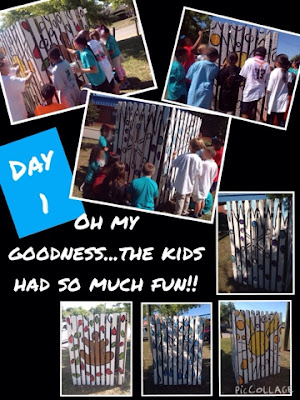 I decided to allow my 4th graders to be the inspiration & the workers.  I used their 4 Seasons project to be the inspiration for the sides.  I took reoccurring elements for their pictures as the inspiration.  I then decided I'd have each of my 4th grade classes come out side to paint for the first 15 min(or so) of their class time to paint.  As soon as the got into my room I had them get their art shirts.  I then passed out the pre-poured paint with brushes already in the cups ( with time crunch..and trying to have 20+ students paint at the same time...you have to be organized).  I then directed students to where they needed to go & what they needed to be painting.  Sometimes it worked...and sometimes there was Day 2?!?!?!?!?!?! 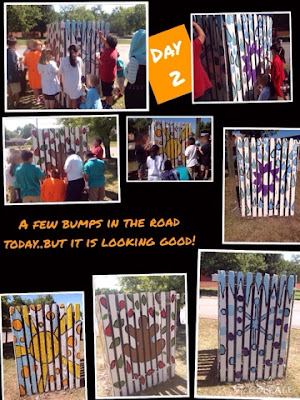 Day 2 was a nightmare.  A couple of the boys decided it would be a good idea to paint on students' backs while they were painting.  They were amazingly skilled at this...because there were 4 adults supervising...and not one of us caught them(my practicum students were there that day).  We did not know what happened till the end of class when I had the students throw their art shirts in the bucket & clean up.  I saw red paint on the back of chairs...and on the back of students!!!  There was red paint on students actual shirts...but thankfully no parents got too mad.  And the boys...they were dealt with!!  I will say this...at least they admitted it! 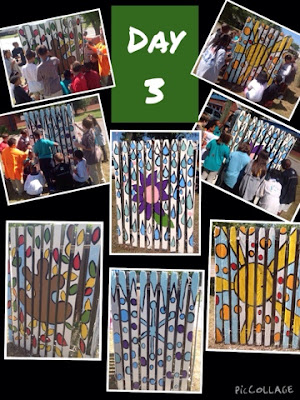 Day 3 was much better, and things started really coming along!  I started receiving many comments from parents & staff...saying that they really liked the new design!! (They had loved the Kandinsky Fence...and many of them had worked on it.  A great teachable moment on temporary art installations! ha ha) 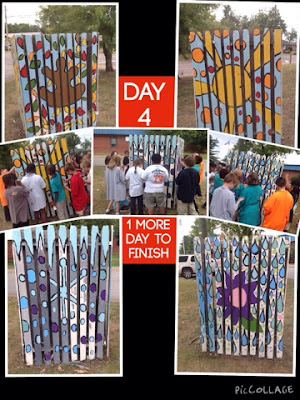 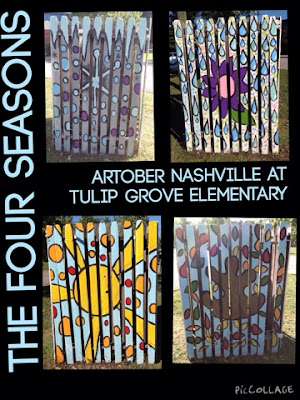 Well...in the midst of the rain...the nine weeks came to an end.  I no longer had time for my students to finish the fence.  With a new nine weeks...comes many new projects & responsibilities.  Plus, we were now into ARTOBER NASHVILLE...and this is one of the main BIG projects I wanted our school to have for the celebration.  So I invited some people to come help out finish things off over fall break (yes..our district has a week off for fall break!).
IT IS DONE!!!!!!  IT IS AWESOME!!!!!!

I'm not sure if the fence will make it another year....but we'll enjoy it till this season ends!!