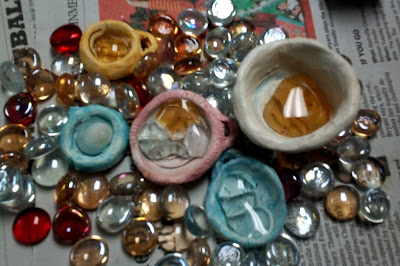 My friend Janet ( msmalonesartroom.blogspot.com ) & I were discussing if we could use glass marbles/beads/etc with our clay lessons.  I don't tend to glaze because of the time/cost of it with the number of children I see.  Sometimes I'll use underglaze and did projects, but usually I just use acrylic with the kids.  Anyways, I made a bunch of little pieces over break so I could give it a try.  Some pieces I did not do a glaze on....some I glazed and laid the glass on top...others I glazed & then put the glaze on top of the glass pieces as well.
Here are the results:
The melting of the glass is very irregular.
The color burned out of some...and the orangish colored ones were red glass.
The ones I did not glaze at all...some of the glass popped out.
The ones I placed glaze over top of the glass....have a film over them.

Janet is going to try some other things...and will post her results as well (right Janet?).  I'm not saying I won't try this with the kids, but I'm not sold on it either.  WORTH A TRY!!! Had fun doing it.