Sunday Devotional With Mr. E: Should I Stay or Should I Go?

I know that many art(s) teachers do not have the luxury of switching schools easily.  Many are in areas where jobs are few and far between.  With spouse, family, or other commitments...moving to a location where jobs are plentiful is just not a viable option.  However, even in a district with many positions...the question of staying or going is not one to be taken lightly.  I've been faced with the decision to stay or go many times over the years.  I do believe it is good to contemplate such things.  It allows you to reflect and gain a greater appreciation for what you have, or allows you to see clearer what would be best for you and your career goals. One of the time I was faced with this question, I was teaching at a school that was 4th worst in our district & 10th worst in the state academically.  There were a number of factors that went into this distinction.  I knew that I was making a difference at this school. I saw it in my relationships with students, parents, and teachers.  I also knew that I was stressed beyond anything I'd ever experienced.  I wrestled with the incredible need I saw at the school...knowing I could make a difference, and the stress that was beginning to break me down and lead me to burn out.  Though I knew the impact I was having, I could not risk burning out so early in my career.  I wanted to be in art education for the long haul.  I also realized that my staying in a position that was not the right "fit" for me was keeping someone else from the position that could have been wired/gifted for such a challenge. There are numerous reasons we contemplate leaving a position.  We must search our hearts, reason with our minds, and trust that we will make the choice that is best for all involved. 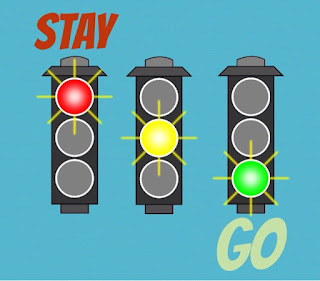 When they asked him to spend more time with them, he declined. But as he left, he promised, "I will come back if it is God's will." Then he set sail from Ephesus.
Acts 18: 20-21

I love the book of Acts.  I have no idea the number of times I've read & reread it.  I've used or been a part of numerous bible studies on Acts.  However, last week I noticed something that had managed to slip by me or maybe did not seem to have a great amount of significance previously.  "When they asked him to spend more time with them, he declined."  WHAT?  Paul just turned down the Ephesians when they asked him to stay.  He was faced with the choice of should I stay or should I go....and we left! Paul was a man on a mission(literally!).  He knew he had to move on to his next stop to bring the Good News to more people.  He also knew that God had raised up leaders in Ephesus that would continue on in the sharing of God's love & the building up those in the faith.  I have seen so many times where believers felt they could not leave a certain situation.  Maybe they felt responsible.  Maybe they felt they would be perceived poorly if they "abandoned" whatever it was in question. Perhaps they didn't feel they had a clear answer if they should stay or go.  Some might simply be afraid of change.  Whatever the reason....God does call us to move on at times.  We can not hold so tightly to something that it becomes our possession.  We must be willing to go & do what God has for us.  Sometimes He calls us to stay.  Sometimes He calls us to go.  How can you know?  Seek God out in His Word.  Seek God out through Prayer(AND DON'T FORGET TO LISTEN MORE THAN YOU TALK).  Seek God through brothers & sisters in the faith who you TRUST & KNOW are seeking God's will for their own life.  Allow the Holy Spirit to guide & direct you.  We often don't hear Him because we are too busy trying to tell Him what we think we should be doing!  STOP! PRAY! LISTEN! TRUST! ACT!  It isn't always easy, but it is the place where peace can be found.