Sunday Devotional With Mr.E: Are You Done?

(This is a post written 2 years ago. My family just returned from a week long trip, and I was unable to write a new post for this week. I hope enjoy this "repeat"!! I return with a new devotional  next week!)

One of the most challenging questions artists & art students ask themselves is "Am I done?".  You don't want leave a work appearing unfinished, but you also do not want to ruin it by doing too much.   I think most of us err on the side of overworking our art.  We don't want to give up until we've given our all to communicated our vision.  So when is a work of art done?  Honestly, I've matted & hung a painting before, but then taken it down and worked on it some more. I believe there is a heart and head connection that happens when we know we've done our best, communicated our vision, and are ready to share it with others.  That's not to say we won't question a work's "doneness" again, but we have found a peace in the level of completion & effectiveness in our work. 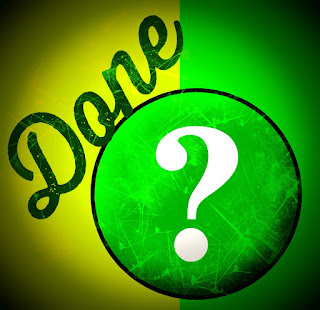 And there came a man named Jairus, and he was an official of the synagogue; and he fell at Jesus' feet, and began to implore Him to come to his house; for he had an only daughter, about twelve years old, and she was dying. -  While He was still speaking, someone came from the house of the synagogue official, saying, "Your daughter has died; do not trouble the Teacher anymore.  But when Jesus heard this, He answered him, "Do not be afraid any longer; only believe, and she will be made well."  - Now they were all weeping and lamenting for her; but He said, "Stop weeping, for she has not died, but is asleep."  And they began laughing at Him, knowing that she had died.  He, however, took her by the hand and called, saying, "Child, arise!"  And her spirit returned, and she got up immediately; and He gave orders for something to be given her to eat.  Her parents were amazed; but He instructed them to tell no one what had happened.
The whole story can be found in Luke 8:40-56

Done.  How many times in your life have you questioned if you are done?  Done with a relationship, done with a job, done with something you thought you were meant to do or meant to be......just DONE!  Things didn't work out like you thought.  It wasn't as easy.  It wasn't as fun. It required effort.  It didn't happen like you thought it would.  In your mind the easiest thing would be to call it done and move on with your life.  I do believe there is a time to be done with somethings(or someone), but too often I've seen people give up exerting little to no effort. I believe we do have a responsibility to put in the time & effort, but we also have the responsibility to bring it to the Lord. There are many things we see as impossible that ,with God, are possible. Sometimes we will see Him do amazing things to change the situation.  Sometimes we will see Him change our perspective on the situation.  Sometimes He will lead us to move on.  No matter, all things can be used for His glory & His honor.